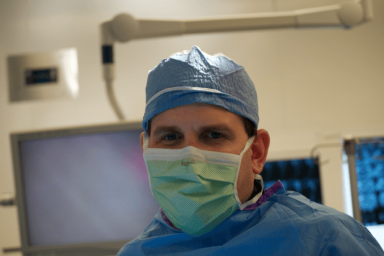 Last week, Christopher Duntsch, a 45-year-old Texas neurosurgeon who earned himself the nickname “Dr. Death,” was sentenced to life in prison by a Dallas jury. After deliberating for just over an hour, jurors agreed with prosecutors that the former surgeon was guilty of a first-degree felony for intentionally injuring an elderly victim.

The incident for which Duntsch was convicted happened during a 2012 procedure in which a 74-year-old patient was having spinal fusion surgery, a major invasive procedure in which bone grafts are implanted between vertebrae. According to prosecutors, Duntsch was directly responsible for intentionally maiming the female patient, who is now partially paralyzed and in chronic pain, when he placed bone grafts in muscle rather than bone, drilled screws into the spinal cavity, and severed a nerve root.

During the nearly two week trial, jurors were told not only the tragic story of the 74-year-old victim, who must now be confined to a wheelchair, but also of Duntsch’s unsavory past, including the death of 2 patients between 2012 and 2014 who died as a result of injuries they sustained during surgery performed by the doctor.

In total, prosecutors created a clear picture behind the “Dr. Death” nickname, asserting that Dunstch had devastated the lives of over 30 patients throughout his career, as well as the lives of their loved ones who are now forced to live with the financial, physical, and emotional pain caused by his negligence and abuse. The trial featured testimony from many of the doctor’s former patients who came to him for relief from chronic back pain, only to be left disfigured and in more pain, as well as physician peers who testified that Dunstch was known for being one of the most careless and dangerous spine surgeons ever seen. The state also cited Duntsch’s spotty history as a practitioner in Tennessee, where he faced numerous lawsuits from injured patients, and his medical license revocation by the Texas Medical Board in 2013.

In their arguments, Duntsch’s defense team did not dispute the injuries of former patients who had surgery performed by the doctor, and instead claimed that Duntsch was simply an unskilled surgeon, but not a willful perpetrator of harm, who had the skill level of a first-year medical resident. The state called attention to the fact that Duntsch had spent nearly 20 years studying, training, and performing surgeries to know what he was doing, and to show that his actions could very well have been deliberate. They also called attention to a history of unusual and unpredictable behavior, including emails sent to his employees in which he referred to himself as a “stone cold killer.”

In most medical malpractice cases, victims are harmed as the result of negligence and failures to provide an acceptable standard of care. While medical negligence can take many forms, it often does not rise to the level of intentional infliction of pain and harm, and medical professionals do not typically face criminal prosecution for their conduct. With Duntsch, however, the devastation left in his wake coupled with his erratic behavior was enough to convince prosecutors to file criminal charges, and for a jury of his peers to agree that the doctor committed acts of willful malice.

These types of cases may not be exceedingly common, but they can and do happen. It is important to remember that while a medical professional can certainly face criminal charges and repercussions for their wrongful and illegal acts, and their punishment provide a sense of justice to victims, these criminal cases do not provide the type of compensation and financial support victims and their families need to alleviate their expenses and have the means to move on and take care of future needs. In order to secure these types of damages, victims will still need to assert their rights in the civil justice system and file medical malpractice claims. It is also important to note that there is a distinct difference in the burden of proof in criminal and civil cases. The “beyond a reasonable doubt” standard is a higher burden of proof than what is used in civil cases – a preponderance of the evidence, or “more likely than not.”

If you have questions about medical malpractice or the steps you should take after being harmed by the negligence or wrongful acts of a medical professional, The Law Offices of Dr. Michael M. Wilson, M.D., J.D & Associates is available to discuss your case during a free consultation. Contact a Washington, DC medical malpractice lawyer from our team today.