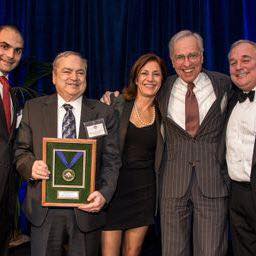 Michael M. Wilson & Associates wishes to congratulate the Honorable Howard S. Chasanow on being named the 2014 Youth Leadership Spirit of Service Honoree. Mr. Chasanow was honored at a dinner of hundreds of supporters on Wednesday, November 19th, 2014.

Thanks go to Lisa Dimonte, Gerry Mitchell, and Scott Sonntag for the herculean task of organizing and carrying out this beautiful dinner and video honoring Judge Chasanow for his many years of judicial and mediation services, which have assisted many victims of medical malpractice in achieving justice in their cases.

The Law Offices of Dr. Michael M. Wilson, M.D., J.D. & Associates can provide the legal counsel and representation that you need if you have been injured due to medical negligence. Attorney Michael M. Wilson is also a doctor with personal experience in the medical field, giving him an advantage in your medical malpractice case. Pick up the phone today and call (202) 223-4488 for a free consultation if you are in need of compensation!