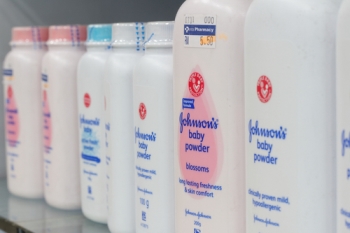 This Monday, a California jury awarded a plaintiff $417 million in damages against Johnson & Johnson, a pharmaceutical, multinational medical devices, and consumer packaged goods manufacturing company. Johnson & Johnson earns billions of dollars per year in profits from their products, one of which is Johnson’s Baby Powder, a talc-based powder some women use for feminine hygiene.

The lawsuit was started by a 63-year-old woman named Eva Echeverria, who claims she developed terminal ovarian cancer after decades of using Johnson & Johnson products. The amount awarded by the Los Angeles Superior Court jury was the largest awarded in lawsuits against Johnson & Johnson. More than 300 more lawsuits are pending in California, and another 4,500 claims are pending in the rest of the country, alleging the company ignored studies linking Johnson’s Baby Powder and Shower to Shower Products to cancer.

Echeverria is near death, even after her surgeon was able to remove a softball-sized tumor from her body. She was unable to leave the hospital to attend the trial, but her attorneys recorded her testimony to play for the jury. In the video, Echeverria asserts she used the powder from the time she was 11 until 2016. She stopped using it after she saw a news story about another woman who developed ovarian cancer after using the powder. Talc is one of the company’s best-known products. According to her, if Johnson & Johnson had put a warning on the product about the potential hazards, she would have stopped using it.

After two days of deliberating, the jury awarded Echeverria $70 million in compensatory damages and $347 million in punitive damages, finding there was a connection between her ovarian cancer and the baby powder.

Johnson & Johnson, of course, immediately claimed they would seek to overturn the verdict. The company’s attorneys argued that many scientific studies had not found a link between the talc products and cancer. They also claimed the U.S. Food and Drug Administration (FDA) had not found the products were carcinogenic either.

One of the studies they cited was done in 2000 by Harvard University. It was part of the National Nurses Health Study of more than 121,000 women, including 78,630 who claimed to use the talc product. Around 307 women developed ovarian cancer. The researchers concluded there was no overall connection between talc use and epithelial ovarian cancer; however, they did find there was a modest elevation in risk for one type of the disease, invasive serous ovarian cancer (the kind Echeverria now has).

Echeverria’s lawyers argued that women across the nation trusted Johnson & Johnson to provide safe products, only to discover too late that the company had known a long time ago about other research showing the talc products were carcinogenic. They cited a study done in 1982, more than three decades ago, which showed women who used talc on their genitals were 92% more at risk for developing ovarian cancer. The lead researcher on the study advised Johnson & Johnson to put a warning label on the product, which they never did.

While ovarian cancer only accounts for a small percentage of new cancer cases in the country (about 1.3%), it is the eighth-most common cancer and the fifth-leading cause of cancer-related death among women. Fewer than half of all patients diagnosed with ovarian cancer survive past five years.

This lawsuit is another in a long history of litigation over product liability involving corporate giants with massive amounts of resources at their disposal. Another jury in St. Louis awarded a Virginia woman $110.5 million earlier in May; this was granted after three other St. Louis juries had awarded about $197 million to plaintiffs with similar claims.

If you or a loved one have been similarly harmed by a product you thought was safe, don’t hesitate to call us. The Law Offices of Dr. Michael M. Wilson M.D., J.D. & Associates is a firm dedicated to representing people who have been harmed through the negligence or carelessness of another individual or group. Talk to our skilled Washington D.C. talcum powder cancer attorney about your case as soon as possible. He is an attorney as well as a physician, making him uniquely qualified to handle cases of a medical nature. Let us use our decades of experience on your behalf.

Contact us at (202) 223-4488 or fill out our online form to schedule a free, no-obligation case review. We accept cases all over the country.